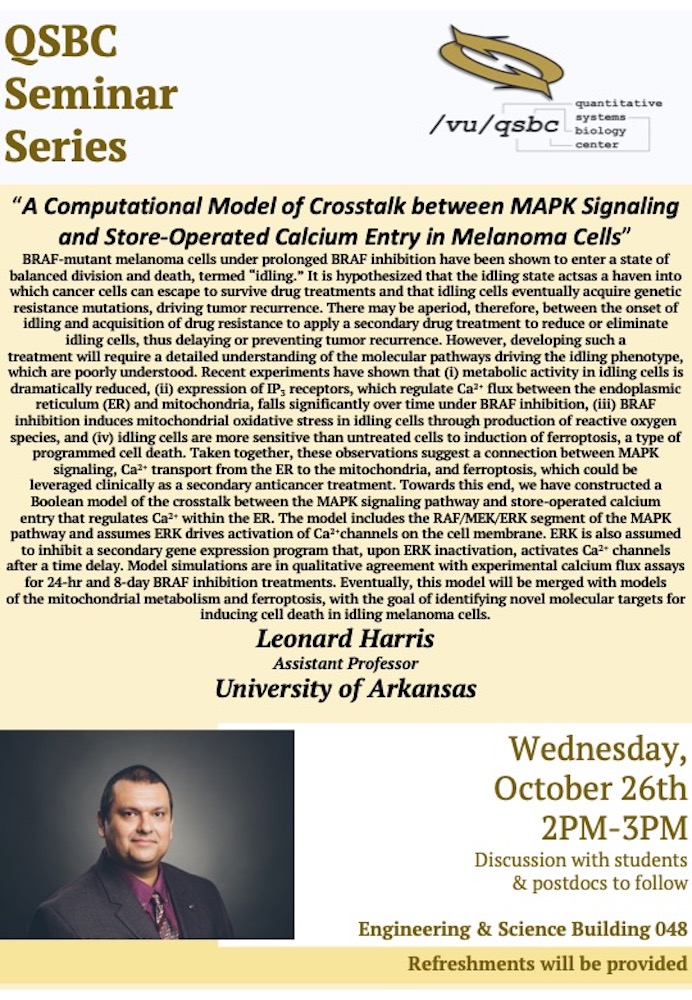 BRAF-mutant melanoma cells under prolonged BRAF inhibition have been shown to enter a state of
balanced division and death, termed “idling.”It is hypothesized that the idling state acts as a haven into
which cancer cells can escape to survive drug treatments and that idling cells eventually acquire genetic
resistance mutations, driving tumor recurrence. There may be aperiod, therefore, between the onset of
idling and acquisition of drug resistance to apply a secondary drug treatment to reduce or eliminate
idling cells, thus delaying or preventing tumor recurrence. However, developing such a treatment will require a detailed understanding of the molecular pathways driving the idling phenotype, which are poorly understood. Recent experiments have shown that (i) metabolic activity in idling cells is dramatically reduced, (u) expression of IP receptors, which regulate Ca-* lux between the endoplasmic reticulum (ER) and mitochondria, falls significantly over time under BRAF inhibition, (ili) BRAF inhibition induces mitochondrial oxidative stress in idling cells through production of reactive oxygen species, and (iv) idling cells are more sensitive than untreated cells to induction of ferroptosis, a type of programmed cell death. Taken together, these observations suggest a connection between MAPK signaling, Ca2* transport from the ER to the mitochondria, and ferroptosis, which could be leveraged clinical as a secondary anticancer treatment. Towards this end. We have constructed a Boolean model of the crosstalk between the MAPK signaling pathway and store-operated calcium entry that regulates Ca?* within the ER. The model includes the RAF/MEK/ERK segment of the MAPK pathway and assumes ERK drives activation of Ca? channels on the cell membrane. ERK is also assumed to inhibit a secondary gene expression program that, upon ERK inactivation, activates Ca* channels after a time delay. Model simulations are in qualitative agreement with experimental calcium flux assays for 24-hr and 8-day BRAF inhibition treatments. Eventually, this model will be merged with models of the mitochondrial metabolism and ferroptosis, with the goal of identifying novel molecular targets for inducing cell death in idling melanoma cells.